In a recent public disturbance in Albuquerque, New Mexico, the man carrying two airsoft rifles in plain sight, was merely questioned and later released by the responding police officers. Had the incident happened in another state or country, the carrying of a replica gun in public would have been treated as a criminal offense. 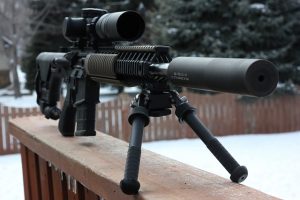 As it is, U.S. laws governing the use and handling of non-powder replica firearms like airsoft guns, vary from state to state; making it important for airsoft gun proponents to know what a state considers as legal or illegal before transferring, selling, transporting or buying a realistic-looking replica firearm.

Airsoft and BB guns are generally used for recreational combat competitions, as props in movies and for simulated military or police training. An airsoft rifle or handgun with the most realistic-looking appearance and features, are therefore the most attractive. On a nationwide level, there are no specific federal laws that restrict the use, ownership, or sale of replica firearms.

Federal statutory limitations are mostly concerned with “substantial product hazard/s,” particularly their potential risks of causing injury to children. That being the case, the federal government explicitly prohibits the sale of replica weapons to minors.

The government agency tasked to regulate and oversee the manufacture and sale of mock weapons is the Consumer Product Safety Commission. Specifically, federal product regulations require the following:

The aforementioned regulations override any state law that is inconsistent with the stated requirements.

In the U.S., every state government has the autonomous power to impose statutes regulating the sale, ownership and use of non-powder, pellet-powered replica firearms. However, under federal regulations, such laws must not include prohibitions on the sale of conventional mock weapons.

The States of Delaware, Connecticut and North Dakota appear to have the most rigid laws pertaining to non-powder replica firearms, because they define such articles as “dangerous weapons.” That being the case, it is illegal in those states to carry or transport mock firearms without a duly approved permit.

In most U.S. regions, state governments define non-powder replica guns as Firearms and therefore subjecting the use, sale, ownership, transfer, and possession of non-powder guns to the state’s Firearms Law. Majority of state laws, regardless of their definition of a replica non-powder gun, strictly impose age restrictions, as well as explicitly prohibit the carrying of mock firearms in school grounds.

In some jurisdictions, low caliber, low velocity airsoft guns are excluded from the firearms definition. Click here to gather more information about airsoft rifles and handguns with low or high caliber and rate of velocity.