Animal activism pertains to social movements that assert the moral rights of animals to live not as properties of humans; but as living beings with rights to exist on their own purpose, whilst receiving protection from harm. Although provided with rational arguments put forward by intellectuals, the movement is unable to gain total support from governments.

Apparently, countries have differing laws on how to protect animals thriving within their region. Primarily because animal agriculture plays an important role in the economy of every nation. Food and by-products (e.g. milk, cheese, butter, eggs) produced by farm animals cannot be just removed as part of daily subsistence.

Moreover, putting an end to the practice of eating meat and all other food products derived from animals will result to business closures and loss of jobs. After all, the supply chain in which farm animals have great value includes that of leather and pharmaceutical industries. 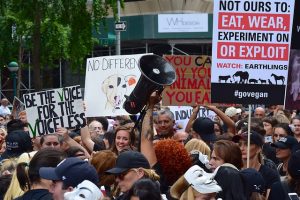 Different ideologies divide organizations engaged in animal activism. One faction calls for total liberation of animals; recognizing every species as non-human animals. Their advocacy is to liberate animals from human activities, such as partaking of animal meat, using animals for scientific researches, and/or keeping them in cages either as pets, as performers, or as business inventory.

The other faction seeks only for the enactment of laws that will ensure animal welfare while in the care of owners, breeders or users. Here, non-human animals are classified as members of species that have value to species belonging to the upper level of a hierarchical system. Even if such is the case, their movement aims to stop mistreatment of animals; including cruel methods used in slaughtering animals in order to serve a business purpose.

Other smaller factions include the veganarchists, anti-hunting activists and militant animal liberators. The latter, insists on advancing the cause by direct and if necessary, violent actions.

Animal liberationists contend that countries do not recognize the natural values of non-human animals. Lawmakers enact laws based on the benefits that can be derived from their use, either as sources of food products, raw materials, or as pets or as entertainers. Their case point is exemplified by the U.S. Animal Welfare Act, which exempts

In contrast, European Union (EU) countries enacted laws that ban fur farming even if it meant closing an important sector of the clothing industry. The United Kingdom for one, banned fur farming in 2000, a pre-election pledge fulfilled by the then ruling Labour party. The passing of the fur-farming bill, was also influenced by the daily protests organized by animal welfare rights movements.

The most recent to impose such law is Serbia. The county closed down fur farms, saving thousands of chinchillas from the horrible treatment and methods used by breeders in removing velvety-soft furs. The rescued animals have since been transferred to new owners; promising to give the best care and attention needed by the creatures, including the best cage for chinchilla recuperation.